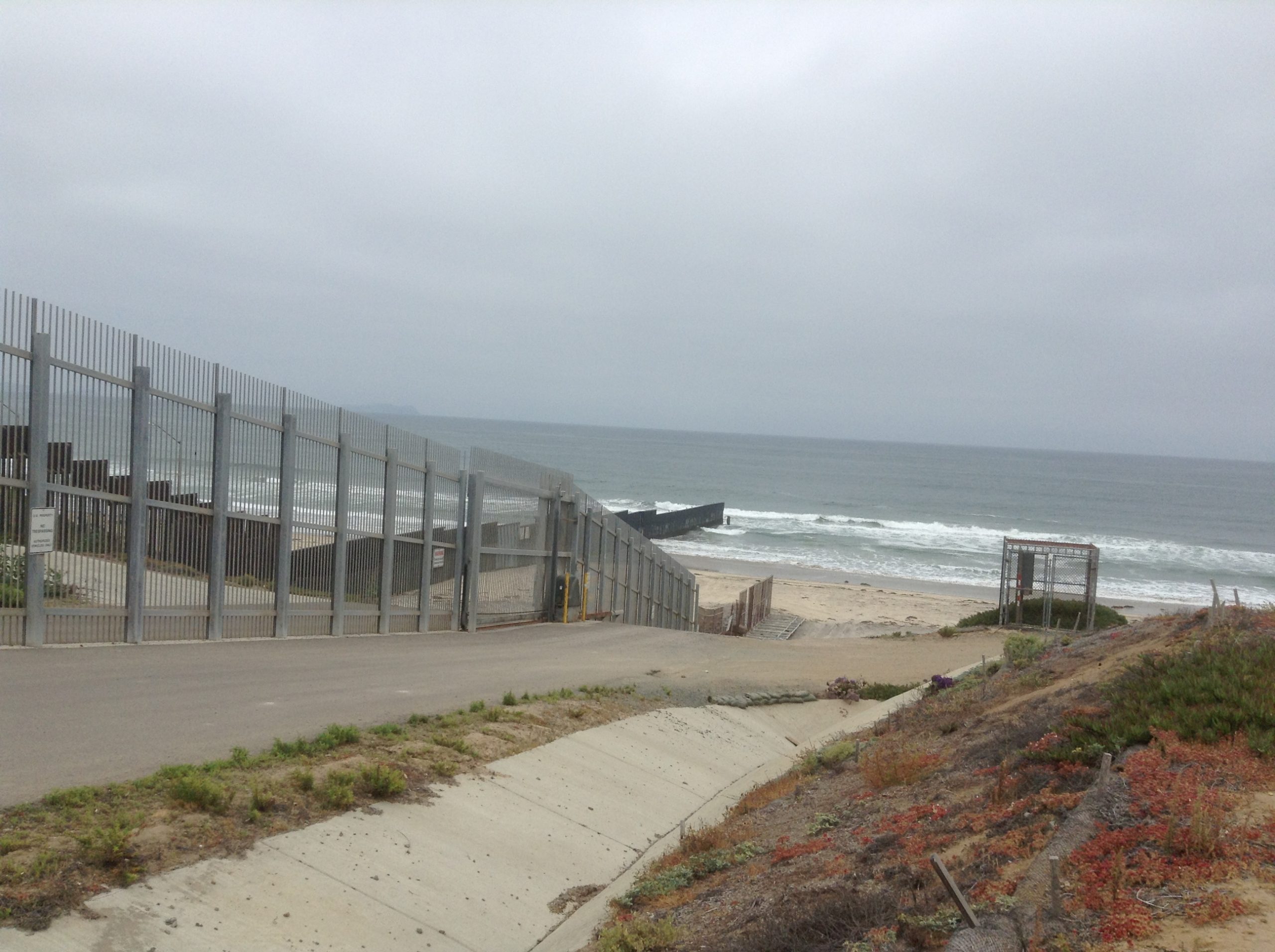 I live about 25 miles from the border crossing between California and Mexico and except for a ride to Rosarito Beach back in the eighties, I’ve never been there.

I live about 125 miles from Los Angeles and I go there, or through there, five to ten times a year. In fact, I just returned from my most recent trip to spend Father’s Day with my stepdaughter and her husband, a trip colored by laughs, hugs and a chance to share a few meals together without encountering any obstacle other than a little bit of traffic.

I thought about this a lot more deeply after a field trip I took on Flag Day to Friendship Park in San Ysidro with my friends Mary Anne and Kay. Our goal: to go see Sister Simone Campbell and the other amazing women who crossed the country with her on the “Nuns on the Bus” tour. Their mission was to focus attention on the need for immigration reform. We, it must be said, were motivated in large part to see the nuns who are the equivalent of rock stars in progressive Catholic circles. Sister Simone has been on the Colbert show for goodness’ sake.

You don’t have to be Catholic to admire these women, though. They look the powers-that-be in the eye and they do not back down when it comes to doing the right thing. They lobby Washington for budgets that are humane and, in recent weeks, for the immigration reform bill now moving through the Senate. They’ve been known to politely but steadfastly agree to disagree with the men who profess to lead the Catholic church. They are the kind of people that make me look more deeply at what I’ve been doing lately for anyone who is not me, related to me, or in my direct line of vision. They don’t preach, they act. In doing so, they ask me to act on my faith, not just file it in that stuffed folder within my heart labeled “Good Intentions.”

All of this makes me glad we persisted last Friday, June 14 when all three of us piled into Mary Anne’s Toyota Corolla and headed down to Friendship Park to see and hear the nuns and others speak in front of the wall that divides the US from Mexico, or at least as much as it can before it descends into the Pacific Ocean. It did take persistence. Let’s just say that we were the first to get there but the last to arrive. We were the first to pull into the parking lot in front of a locked chain separating us from our destination. No nuns or bus, just a collection of hardy souls pulling in behind us and emerging from their cars mystified yet hopeful.

We walked nearly two miles from the parking lot almost to Friendship Park, our trek through the gentle mists of the marine layer fueled by faith that the nuns would eventually show up even though the park was all but deserted except for hundreds of birds, a lone bicyclist, and a few helicopters that circled above apparently uninterested in why a group of middle-aged women were walking to the border. Just as we neared the final bend, news came: the nuns were on their way but would speak in the parking lot. We doubled back and were approaching our car once again when suddenly a stream of vehicles bearing cheerful determined women, news cameras, and all those who had waited in the lot while we ventured out streamed past us. We ran for our car, or at least moved as quickly as our sandals and trick knees would allow.

But in the end, we got there and as we listened to the nuns and the other speakers, we realized that our inconvenience was laughably insignificant compared to what the usual park visitors must go through just to see the faces of those they love for minutes at a time. Here, at the park, on weekends and on holidays, a gate in the wall opens for a few hours and people on both sides of the border may get a chance to share a meal, some news, a few prayers, or simply to hug each other. We heard that very recently, a man had driven down from San Francisco so he could hug his daughter. He had fifteen minutes with her before he had to retreat back to the US side of the wall.

Others, of course, pay a far higher price. A hush fell over the small crowd at the gate when Sister Simone shared an account she’d heard in Tuscon of a mother found curved around the body of her infant in the desert, both dead. The sisters, Dan Watman of Friendship Park, Enriques Morones, founder of Border Angels are well-versed in all the aspects of the immigration issue — business, political, ideological, even the fears generated by the drug wars that cross the border — but they ask us to consider above all the human side.

The entire purpose of Friendship Park itself, Watman explained, was to provide a way for people on opposite sides of the border to meet and learn about each other, to share, to become friends. The wall did not change that mission but it has made it immeasurably more difficult.

As I type these words, I am certain that there is a woman my age maybe within a few miles who has has not seen her children since they were babies. I have probably walked past a mother who gave birth to her children in this country and lives in fear of being separated from them. Conversely, I have neighbors whose life companions are immigrants who entered the country legally; an open door and a pathway to citizenship has allowed them to contribute to our community and to fall in love.

The speakers on Friday (Flag Day by the way), listed many reasons to support the immigration reform bill that the Senate has just finished debating. I am sure there are many reasons that those opposed to it can offer or seek amendments rooted in fear. Fear abounds these days. Fear, I realize, is at the heart of my reluctance to venture across the border. Fear is a fence in my heart. People are dying in the desert and families are torn apart because of fear like mine.

I stood at the fence last Friday and imagined Friendship Park as it must be on weekends when people speak through the bars or, for those brief few hours, find an opportunity to embrace. The fence looms now in my memory as a challenge, to come back, at least this far, to look, listen, and learn.

To follow the progress of immigration reform and to stay in touch with your Senators or Representatives, here’s a one-stop link: Contact Legislators