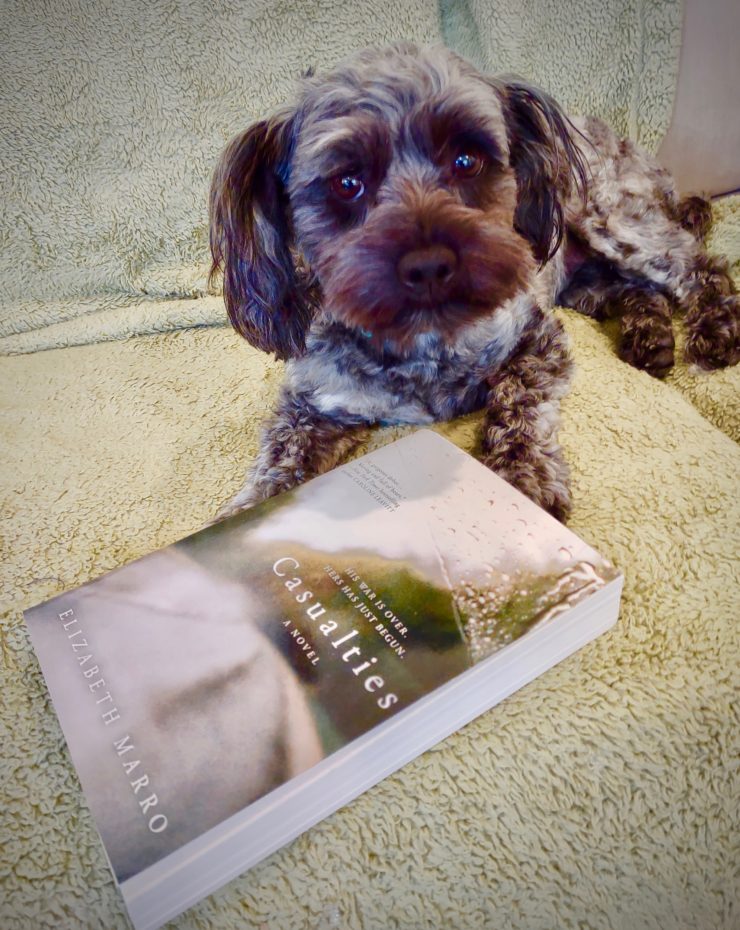 Hi, I’m Frida, the canine assistant for Elizabeth ( you can call her Betsy). She would love to join your book club’s discussion of CASUALTIES by phone, video chat or in person whenever possible. Just email her at elizabethmarro@substack.com. And if your club would like its own set of signed copies, just click here.

Here are some questions that might get you started.

1. Are there examples in this novel of casualties suffered personally by the characters that go beyond the most obvious ones associated with war? If so, how did these influence the course of their lives? How aware are Ruth and Casey of the casualties they may have suffered?

2. How do you think you’d have handled Robbie’s homecoming if you were Ruth? What might you have done differently? Do you understand her decisions even if you might have made different ones?

3. Does Ruth’s response to Robbie’s enlistment surprise you? Why does she react the way she does?

4. What is your sense of the relationship between Ruth and Robbie? How does the novel comment on the dynamic between parents and children? Do you think a different relationship would have led to a different outcome?

5. What is Robbie seeking when he enlists in the Marines? What does his experience in the military give him? How does going to war affect his feelings about being a Marine?

6. How did your view of Ruth change from the beginning of the novel to the end? Why? At what points could you relate to her and understand her decisions, whether or you agreed with them or not? What might you have done differently?

8. Do you know any people like Casey? What made it easy or difficult to relate to his character? What made you like or dislike him?

9. At various points in their lives and in the novel, Ruth, Robbie, and Casey think about how their lives might have been altered had their circumstances been different or if they’d made other decisions. What might have led to a different outcome for each of them? How would this have changed them and the story?

10. Early in the novel Ruth recalls with a sense of frustration her grandmother’s comment, “It’s all one life, honey. You can’t just start a new one because you don’t like the one you have.” What do you think she meant? What did Casey mean when he echoed the same thought? Are they right?

11. Why is the relationship between Ruth and Casey cathartic for them both? What do they learn from each other?

12. What do you think Ruth’s life looks like five years after the book ends? What about Casey’s? Do you think one character has a better shot at getting what he or she is looking for than the other? Why?

13. How did reading Casualties affect your understanding of the challenges faced by veterans and military contractors and their families in the aftermath of recent wars? Are the issues faced by contractors distinct from those of active-duty military or veterans? Are they perceived differently? How and why?

Article. Catching Days: Introducing Next Author in the Series, January 26, 2016

Interview: Discussion with Peter Biello, host of of New Hampshire Public Radio’s All Things Considered, for The Bookshelf, April 29, 2016

Guest Post: “The True Value of All those Drafts“, weheartwriting.com, February 3, 2016

Contributing Editor:  The Whole Alphabet published by So Say We All Press. Performance: VAMP – “You Hold, I’ll Pull”