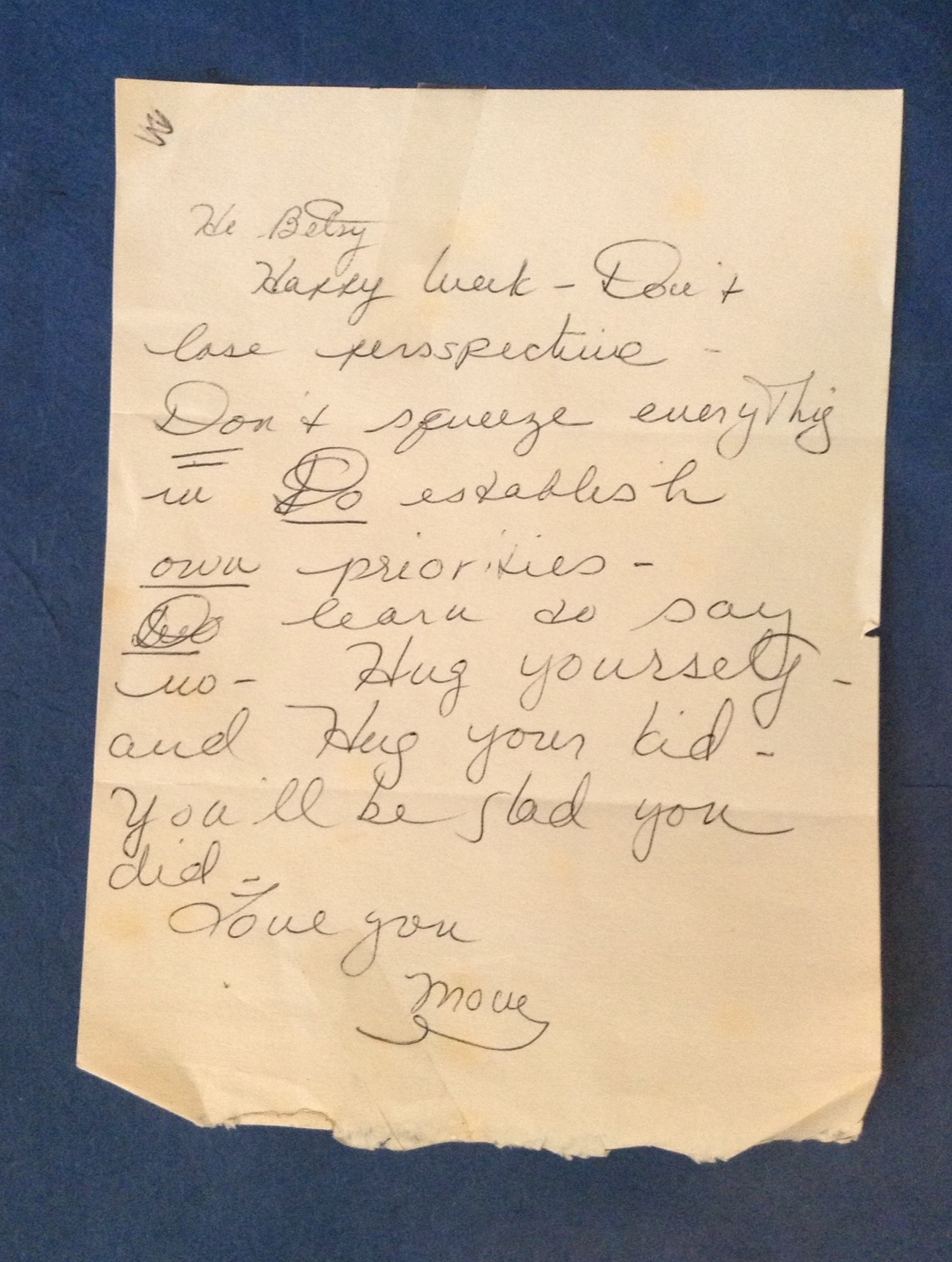 It’s five o’clock on Monday morning and my mother sits in bed, knees up, a pad against her thighs, her second cup of coffee steaming within easy reach. Her pen flies across the page in front of her leaving behind a trail of thoughts that have been on her mind for days, minutes, or take shape as she writes.

I can reconstruct this because on more than one visit home back in the early days of my adulthood, I found her there, often with my infant son tucked into the pillows next to her after she’d swooped him up so that I could have a rare extra hour of morning sleep.

“Happy Monday. Hope between you and the numerologist you had a good weekend.” Monday, 1980

These were her “Monday Letters.” She wrote her first one when I left home at 17. As the rest of us tumbled out of the nest, one or two a year, she wrote more. She has written over 1,500 Monday letters to me by my estimation. Add my siblings, step siblings, her godchildren, and fellow travelers she adopted along the way, and we are talking serious writer’s cramp and the death of a forest or two before the advent of email and texts.

“Dear Betsy, a day late and dull stationery to boot and oh dear a lousy pen. Not a very good way to start the day. It’s 6:15.”

Not long ago, I was rooting around in the garage and found a battered cardboard carton labeled “Mom” in black marker. The seams of the box were worn; the top barely able to contain the letters jammed inside. The letters, survivors of my mother’s weekly correspondence, seemed to be pushing their way out of the box to find me. I forgot whatever I’d been looking for and hauled the box into my office and for the next few days, I read them all. 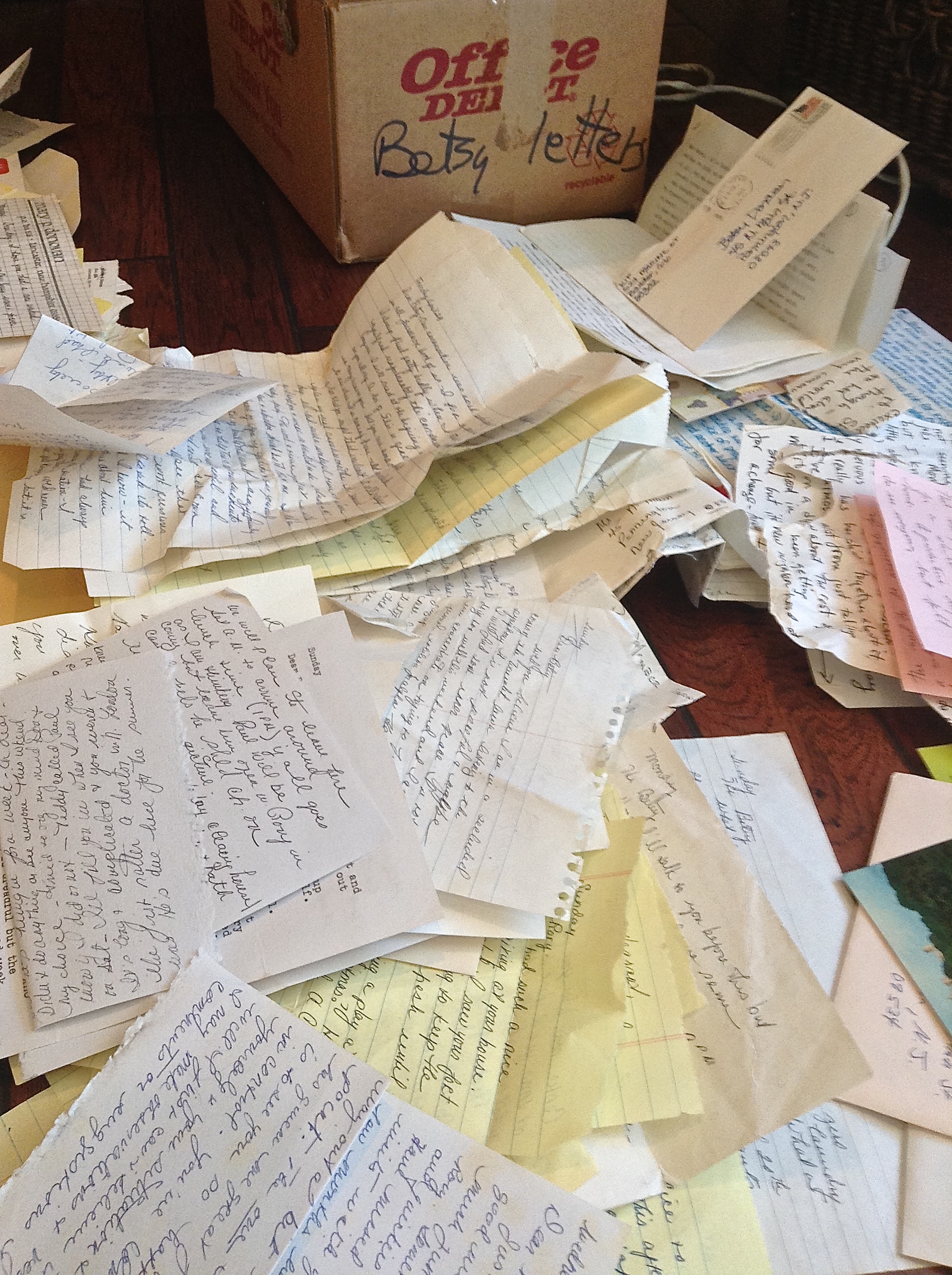 I picked up each letter with the same combination of eagerness and trepidation I used to feel mid-week when her letters usually arrived.

“Our conversation was most unsatisfactory – to be blamed in all fairness on both of us. I for my part am sorry I always flunk pretty badly when I attempt to contain myself and unfortunately I’ve been containing my opinions on this for a very long time.” 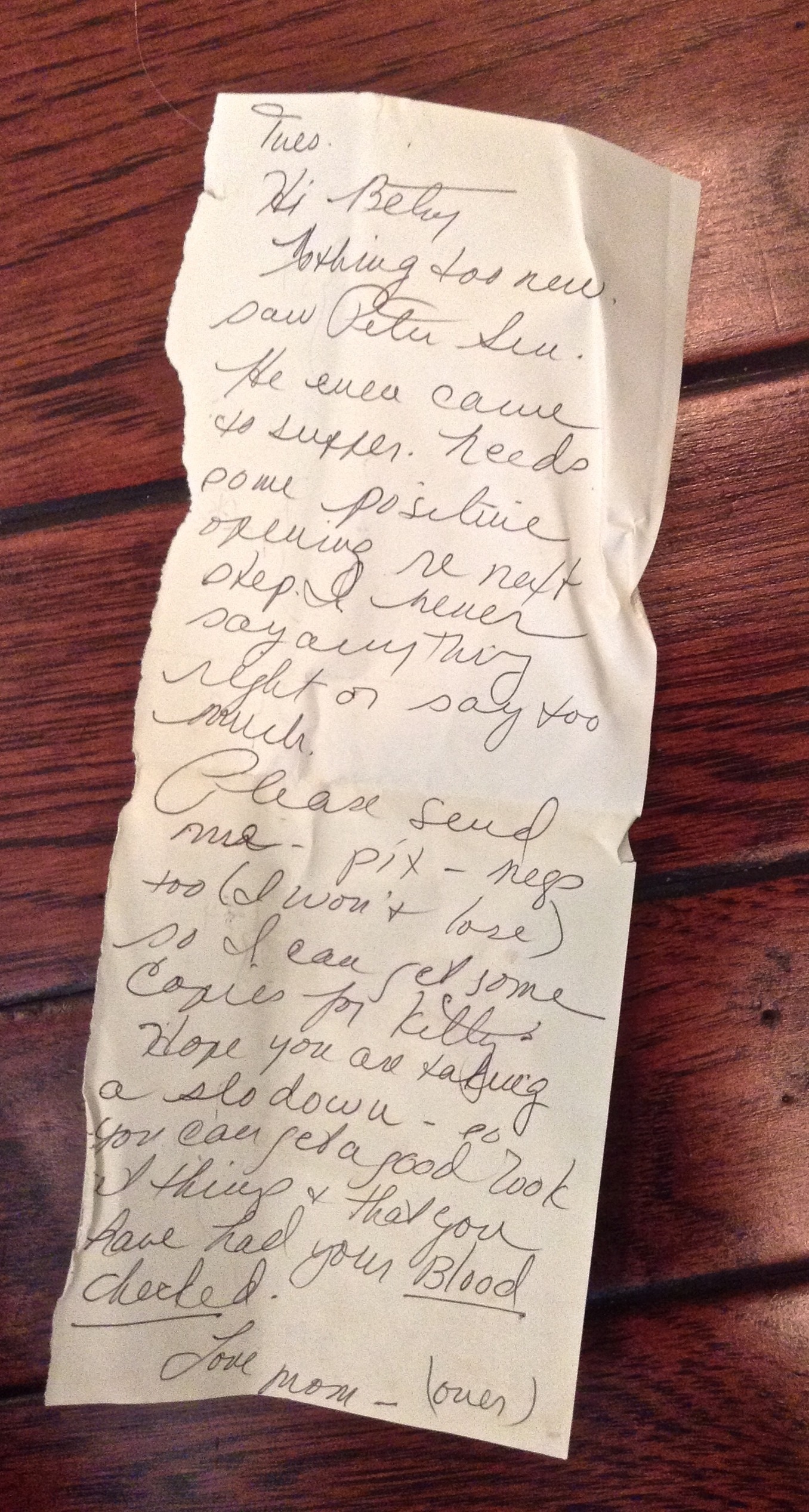 They weren’t always fun to read. The letters I found spanned a chunk of late seventies, early eighties when I moved with a man ten years older to the suburbs without getting married and without a job. I went into debt. My son was hospitalized after COBRA ran out. My relationship with my partner slid into a swamp I couldn’t seem to get out off with my self-esteem intact. She called often. We visited when we could. But her letters never stopped coming. Holding one — even the lectures — was like feeling her hand in mine. She couldn’t pull me out but the letters told me she would be there, cheering me on when I finally emerged on my own.

“Don’t beat yourself up.  Whatever you do, we love you.”

Each letter was at least one, but often a combination of the following:  hello, weather report, family news, a verbal finger-prod between the shoulder blades, a long-distance hug, wistful wonderings, a mirror, warning, atta-girl, “to-do” list, food for thought, how-to make everything from chicken l’orange for eight to how to manage money. There were lots of letters about money, how I handled it; how I didn’t. 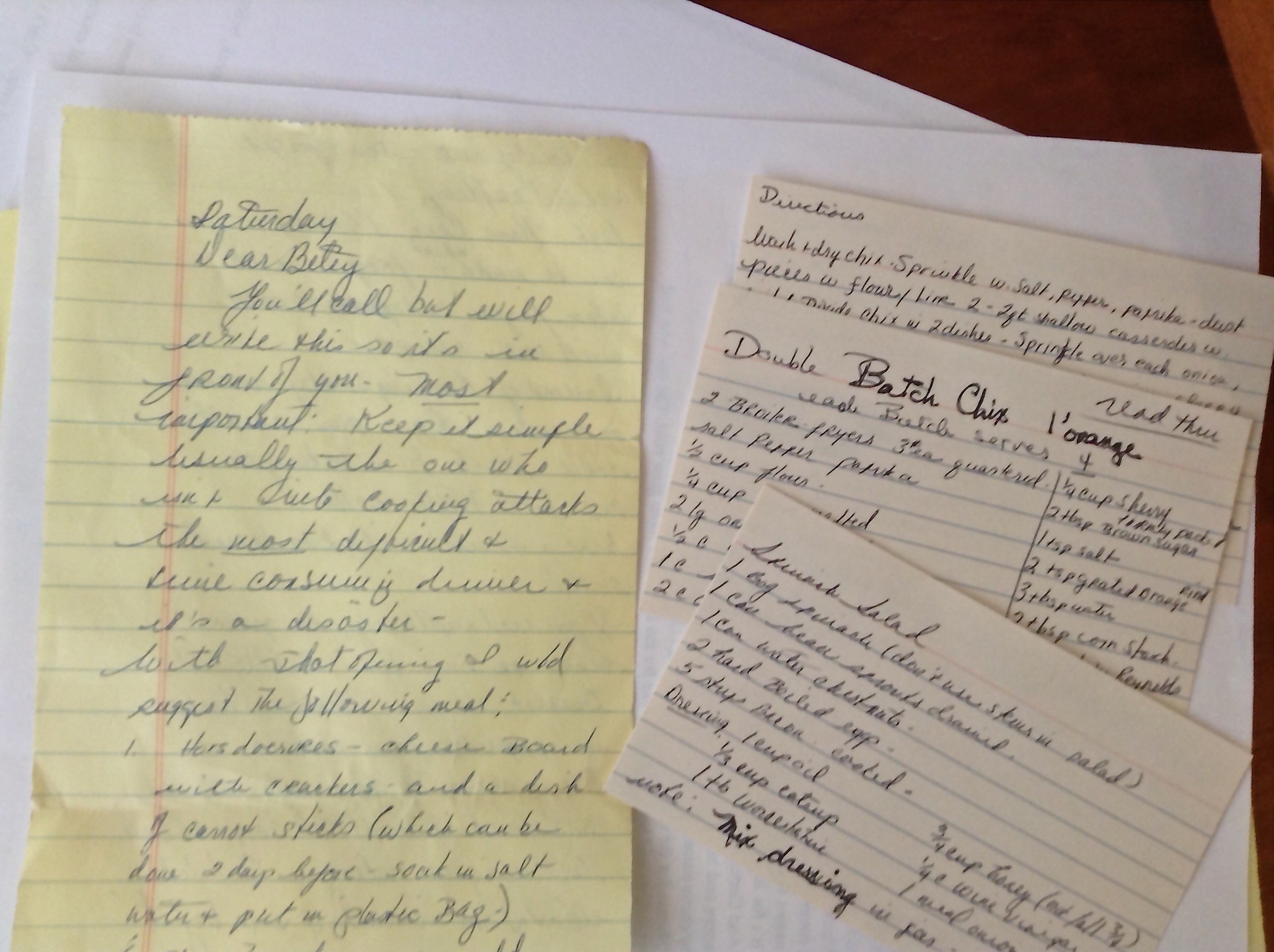 “Thought I’d try to give you a rough outline of how to make a budget.”

And there were plenty in which she wrote about her own fears, her own anxiety about the future, her own struggles to grow.

“Thanks for listening to me. I’m really in a mess. Trying to control what I probably should do with what I want to do. I know that it will work out.”

As I sift through the letters, though, the content of the letters is eclipsed by the fact of them. They are tangible evidence of who I was, who she was, and how we worked our way through the holding on and letting go between a mother whose nest was beginning to empty and a daughter whose start-up nest was a hot mess.

“You have to get a grip on yourself. You will NOT be alone for the rest of your life no matter what. The hardest thing is when you’re really are trying and you really feel that you are contributing and then you get so lonely and are shot down. I’m speaking from the heart. It just doesn’t have to be. You get ahold of yourself and stay hold no matter what and don’t let your stubborn determination get the best of you. Have a good week, Love, Mom.

In them was the determination to forge new relationships not just with me but with each of her offspring and other loved ones, to help us nurture connections with each other. They were her way of reconciling her determination to make us all independent with her desire that we all stay connected. They show that when she had a few minutes to herself, she thought of me, my siblings, all her loved ones, and got out her paper and pen. She started out more than one with “Just wanted you to have some mail.” We all knew that some got longer letters some weeks than others; some weeks were tougher than others. Sometimes, a letter was meant to be shared as was the case with this one to me and my son sometime in 1981:

“Hi, I love you and I hope your respective lives are moving onward and upward. Happily, Hastily, Mom/Gramma”

Over the years, the letters helped to weave the fabric connecting all who received them. We can lob a standard quote, “Have the courage of your own convictions” to a stepbrother or sister and they can laugh and toss back, “And poco a poco” or “Don’t lose perspective.” 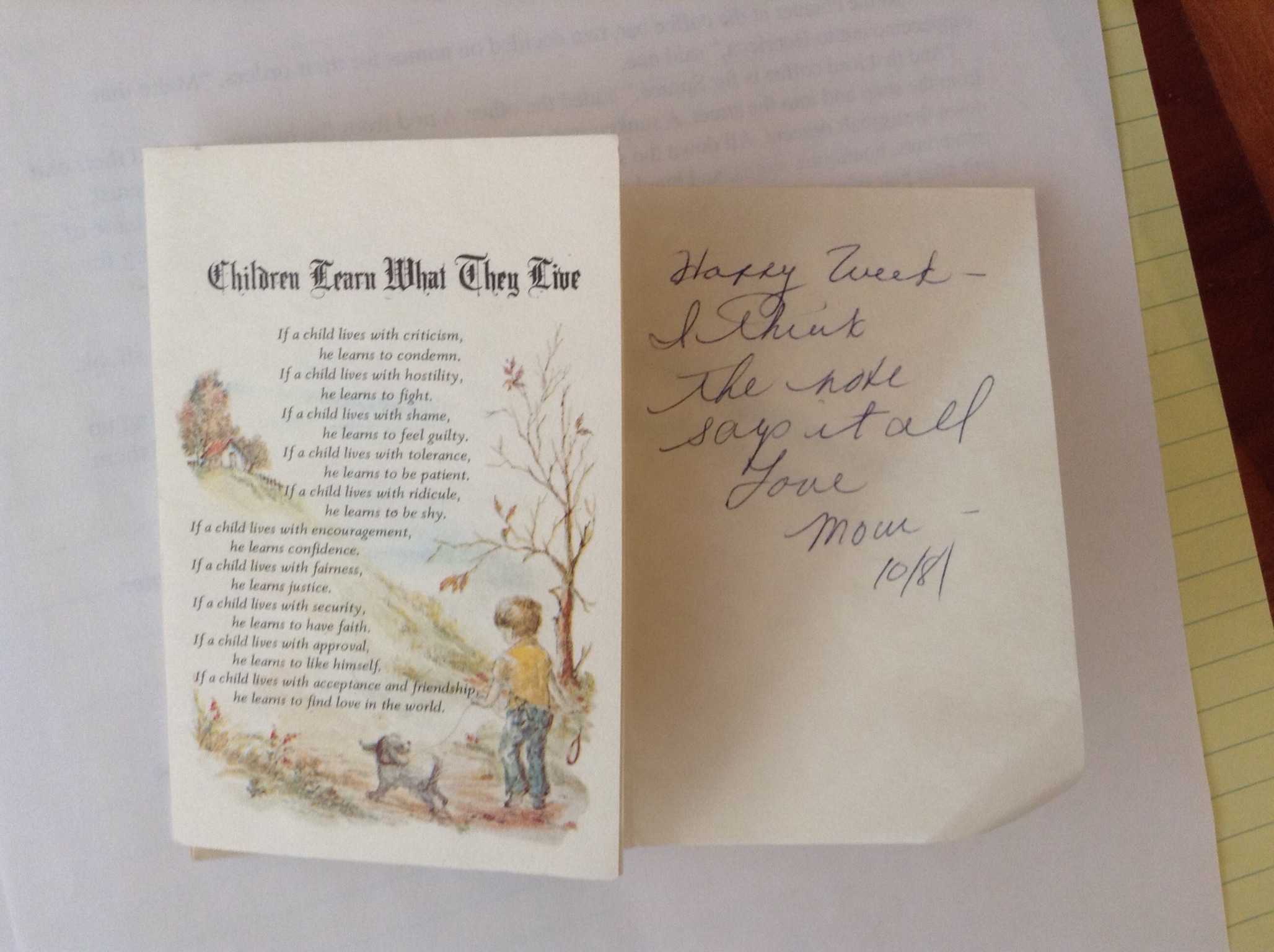 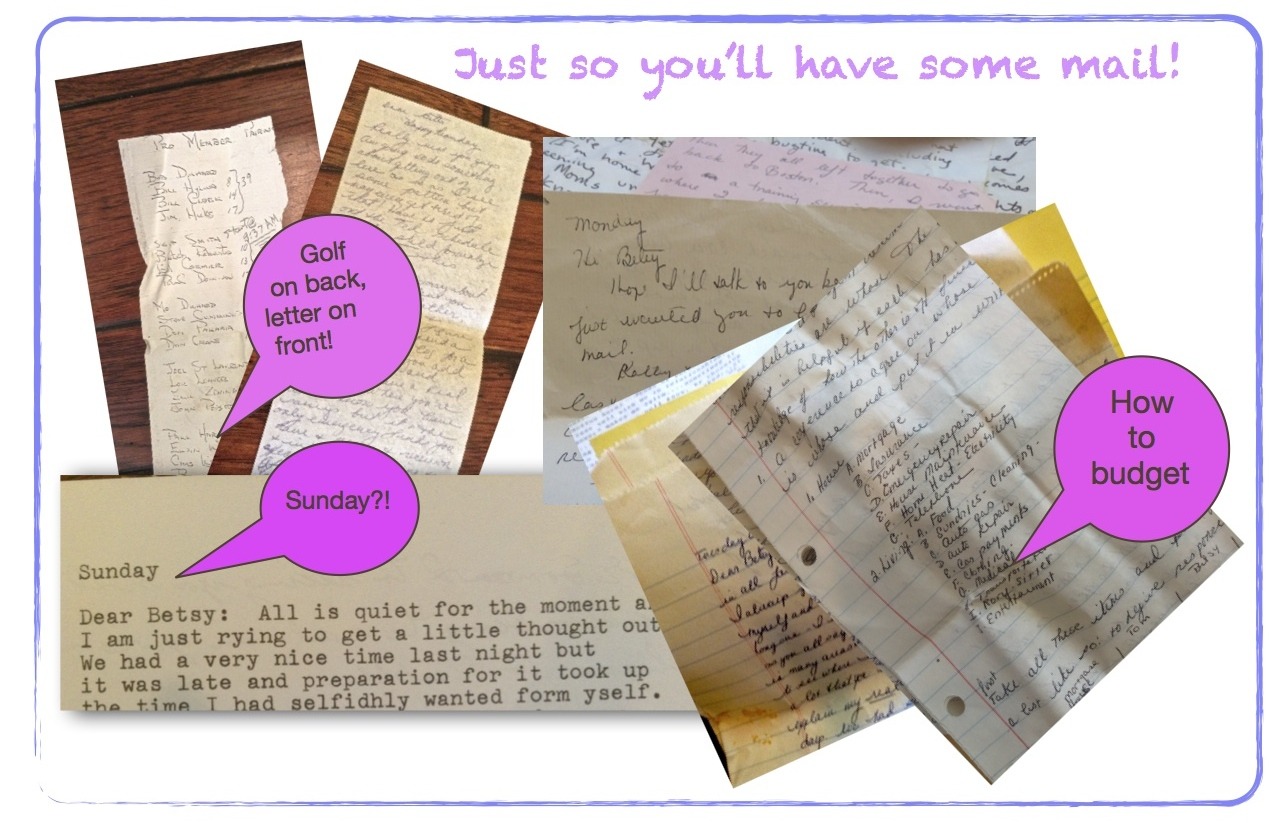