There was a long and winding road. There were semis blasting by. There was an echo of long lost voices of those who had traveled before.

There was diarrhea. Explosive diarrhea. Followed by a rinse with the only liquid available: Gatorade, and thirteen more miles of walking before the day was done.

Not once, though, was Andra Watkins afraid as she walked the entire 444-mile length of the Natchez Trace.

“I was lonely. I was bored sometimes. I was in pain. But not afraid,” she tells me in a recent interview over FaceTime. She’s fresh from a shower, hair still damp, her eyes sparkling despite fatigue from weeks of public speaking engagements.

“We don’t do a lot of things, especially as Americans, because we are taught to fear so much. We miss a lot in life. I don’t agree with that. I have decided to do things even though I may be afraid at the start.”

Watkins took the same attitude when she wrote her first novel, “To Live Forever: An Afterlife Journey of Meriwether Lewis.” Faced with the recession and loss of her lucrative consulting practice, she could have played it safe. Instead, she plunged into writing full-time. She chose Lewis, the leader of the famous Lewis and Clark expedition team, because he was a risk taker and got what she calls a “bum rap” at the end of his life. Historians continue to debate whether he was murdered or committed suicide three years after the triumphant return of the Lewis and Clark expedition into the Louisiana Purchase and Pacific Northwest. When he died, Lewis was on his way to Nashville, reportedly to address complaints lodged against him as governor of the Louisiana Territory.

When it came time to promote her book, Watkins decided she would walk in his footsteps all the way from Natchez Mississippi to Nashville, Tennessee, a distance of 444 miles. And she decided to invite her father along as her wingman. His job would be to drop her off at the starting point of each segment and pick her up at the end. He weighed the attractions of the journey against the comfort of his recliner and their long, often contentious history, and said no, it “doesn’t sound like that much fun, Andra.”

She thought of his “legendary gas, sleep apnea machine which didn’t drown out a single explosive snore, and agreed. But he was her only option. She prevailed.

This is a good thing because her walk resulted in an account that will hold interest for anyone who wants to take a long walk — or take one vicariously — and anyone who loves another person and wants to rediscover the importance of spending time together.

By time time Watkins walked into Nashville on the last day of her journey, she had sold a little over one book for every mile she walked but she had material for her memoir, “Not Without My Father,” and the impetus to launch a campaign called, “Making Memories.”

Here are some highlights from our conversation and her book, “Not Without My Father”:

You don’t need to be an athlete. “Nobody could convince me that an unathletic woman and her mid-life paunch were incapable of walking more than a half-marathon every day for a month.”

Training. “I approached it like I was training for a marathon. I walked 15 miles once or twice a week and walked shorter distances the other days. Five days before I started out, I didn’t walk at all to give my body a rest.” Nothing, however, prevented the blisters that bloomed beneath her Saloman walking shoes every day of her journey. “My feet just blister no matter what.”

The Good: The pain she experienced every day gave her new empathy for her father. “I saw how the body gave out, slowed down, refused to cooperate with the mind’s intentions…was this what Dad’s life was like all the time?”

The Bad: A bobcat at Milepost 91. Eye contact, the crouch of a wild animal stalking its prey, a frantic sprint up the middle of the road to mile Milepost 92 where things got good again: Dad was waiting.

The Ugly: See aforementioned diarrhea. There was a bright side, though: “The innkeeper that night took pity on me and let me use the washing machine.”

The Beautiful: Arriving at mile 133 and finding a robin waiting for her. The robin hopped from twig to twig as Andra moved along the Trace, ‘when I noticed, Nature granted gifts that superseded pain.”

And there is this:

“Some people have told me they were inspired to try something like this with people they love. One family is walking the Foothills Trail in stages. A couple who had a baby have decided that they and their son are going to walk stretches of the Appalachian Trail every summer together as he grows up.”

Essential equipment. Good walking shoes. A voodoo doll tucked into the strap of your backpack. “It gave me something to talk to. After five hours of silence I was grateful to hear a voice even if was only mine.”

On walking and writing. “It’s a lot easier to walk 444 miles than it is to write and sell a book.” But both, she hastens to say, are worth every bruising minute. ” Readers tell her that reading her book has made them think about their own loved ones. “Some share memories they are glad they made before somebody died. Some talk about how a part of the book made them think or feel. I”m always amazed that anyone reads what I write.”

The Secret. The point is not the walk, it is the time spent away from “the world.” “I couldn’t imagine carving five hours of the day ,” Watkins says. “Taking time like that is a gift we can give ourselves even though we may not see that as we are doing it.” 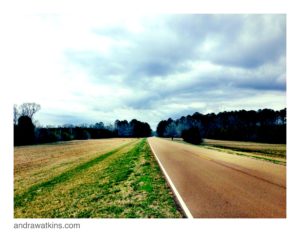