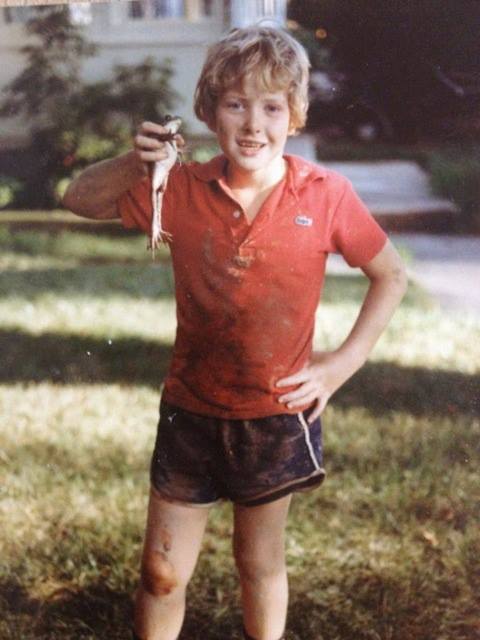 Today, April 20, is about Easter. It is also about a boy.

The boy in this picture came into my life on April 20, 1975. He doesn’t look this way any more. He’s taller, his shoulders sometimes hunch when the world gets a little much for him, there are a few lines at the corners of his eyes when he smiles.

He’s probably wondering where all the time went. I can’t help him with that.

I can however, remind him of the day when he, just turned seven, brought his froggy friend home for supper. He wanted to create a habitat for him even though the obvious habitat was the creek bank just down the hill where they’d both been spending some quality time together all afternoon.

Arrangements were made. The boy took a bath (I insisted), and the tub was cleaned and prepared for the frog. We placed a rock inside the bath for that homey touch. The water was shallow and what my son determined was the right temperature. We closed the bathroom door.

Did I mention there was only one bathroom in the entire house?

Flash forward to the middle of the night. I have to pee. I forget about the visitor. The minute I open the door, and nearly lose it right then and there when something launches itself right at me. Frog is on the loose. He’s taking the steps three at a time, heading for the downstairs, the living room, the creek.

The boy sleeps like the dead or like seven-year-old boys who have spent the entire day outside. When I yell “The Frog Is Loose” into his ear, his eyes fly open and he’s off. For the next hour we pursue the amphibian through the house, under steam heaters, under couches, with paper bags, much frantic worry on my son’s part and some exasperation but mostly held-back giggles on mine.

The good news is that we saved Mr. Frog from himself. My son snared him in a paper bag. We marched out into the summer night in our pajamas. I started the car and the boy climbed in clutching the top of the bag. We drove to the bottom of the hill where the creek burbled.

I watched the boy get out, carefully lift the frog out of the bag and look him in the eye.

“Good bye,” said the boy. The rest of what he said was along the lines of “I’ll come back in the morning but I know you might not be here. I really wished I could have kept you but I know that wouldn’t have made you happy.” And then he let him go.

A moment of silence followed and then the boy climbed back into the car. A little while later, after a little talk and a glass of milk, he was once again asleep.

To the boy, on his birthday, I say “Happy Birthday. There were times when I wished I could keep you just like this, all muddy, smiles, and full of plans for a frog who had very different ideas.”

I have kept this picture though. I keep the memory of that night along with so many others. I persist in the idea that this boy still lives inside the man my son has become. There is some evidence for this. He still loves digging in the dirt.  He still loves animals although the donkeys would not fit in the bathtub. He still has the most amazing smile.

Happy Easter to those who celebrate it and may all find joy and renewal in this day.