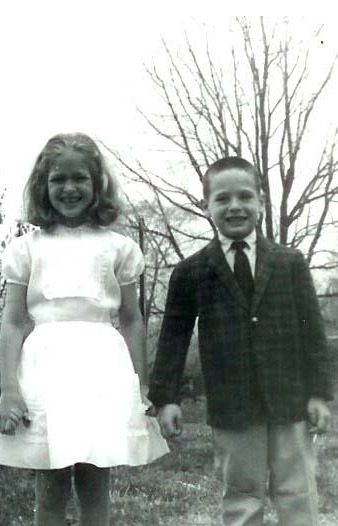 Michael Valentine Smith may have prevented a murder back in the summer of 1974 when my brother and I were stranded in Port Angeles, Washington for nearly ten days. In a Pinto station wagon. In the rain.

It was day five or six. I remember the relentless drumming of water against the car roof. I remember waiting to take my shower in the campground’s bathroom, hoping someone would leave her soap or shampoo behind because I was out. I remember, in a what-the-hell moment, that we spent our last few dollars in an expensive touristy restaurant where my brother and I inhaled giant roast beef sandwiches that came with crisp pickles, french fries, and one little plastic cup of horseradish. I confess to leaving the ramekin of horseradish untouched and waiting for my brother to do what I knew he would do scoop up the cup of horseradish, ask “what’s this?” then, without waiting for an answer, squeeze the entire contents of the cup into his mouth.

We knew each other well, my brother and I. We should have. He’s less than a year younger than me and I have no childhood memories that don’t include him. And, after three and a half weeks of traveling together in the 80-cubic-foot confines of my mother’s green 1974 Pinto station wagon, we’d absorbed knowledge of each other the way our sleeping bags absorbed the water dripping in through the window. Since our — okay, my — second fender bender we had not been able to close it all the way. I knew he’d eat that horseradish because at that point there wasn’t much we wouldn’t eat.

After that meal, we were officially out of money. We had a few more days paid at the campground, a dozen packets of instant oatmeal, some tea, and a can of beans. That would be it until my mother could send a money order from the savings I’d left behind in New Hampshire. Our plan to pick up odd jobs failed when employers realized we were too young to serve liquor and not likely to stay through the summer into the fall. Besides, we smelled like wet socks left to rot in a gym bag for months.

It was in Port Angeles that two events occurred. We had a huge fight and we met Michael Valentine Smith. The argument cleared the air, metaphorically speaking anyway. Michael V. Smith guided us back to each other.

Want your own free copy to read or re-read? Scroll to the end of this post.

The argument, in hindsight, was long overdue. Friction began to erode our bravado our fist day on the road when I rammed the Pinto into a car in front of us on the Tappan Zee bridge. Other sources: our rapidly dwindling money supply, the question of whose idea this trip was anyway (mostly mine with an unexpected assist from our mother who urged me to take her car, and my brother), and the tyranny of AM radio which alternated between The Hues’ Corporation’s “Don’t Rock the Boat,” and Diamond Earring’s, “Radar Love” until we were ready to gouge the radio out of the dashboard.

Just a week or so earlier, he had turned 17 and I had turned 18. I was old enough to buy beer legally in Denver, a moment I had thought would stamp me as an adult. It didn’t work. Our inherent shyness, acute self-consciousness, and naive lack of planning exposed us for the kids we were. The country had turned out to be so much bigger than I imagined; a thousand miles on a map was a matter of inches. Driving that same distance on strange highways that took us further and further from the familiar mountains of home thrilled me on the one hand and, on the other, dissolved my vague and romantic notions that all we would have to do is get going and adventure would find us. I was embarrassed by the time we reached Port Angeles. Nothing was more painful than confronting my own incompleteness and there was my brother, every morning, every afternoon, every night, a witness to my failures.

It added up to a combustible combination that seemed powerful enough that day to blow the doors off the Pinto.

When we couldn’t trust ourselves to say another word, we reached for our books. Books were our refuge, our allies, and a source of confidence since we’d been little because we’d both learned young, at four and five, during nightly lessons at my father’s drafting table.

After a while, the air stopped vibrating with tension and I remember being aware of the rain, the turn of pages, and my brother’s breathing. And then he laughed.

“What?” I asked him, seizing this as an olive branch, or at least a sign that the storm had passed.

I don’t remember the page he was on or what made him laugh but I saw that he was reading Stranger in a Strange Land, one of three Heinlein novels in a set he’d been given before we left. I’d already started it and wanted to keep going but it was, after all, his book. We started talking about the parts we had both read and then one of us, I don’t remember who, started reading it out loud. We took turns and kept taking turns until we finished it.

“Love is that condition in which the happiness of another person is essential to your own.”
― Robert A. Heinlein, Stranger in a Strange Land

Here was a character who, like us, was thrown into the deep end of an experience without any understanding of the people, history, culture, or landscape. Without preconceived notions and no self-consciousness, this character’s journey offered a few lessons about what it takes to really see, hear, and learn. I’m not sure we absorbed them though. It was enough to have found a way to talk with each other, to provide comfort and connection in the form of a great story and a trusted voice.

Very little evidence of our road trip remains. The Pinto is long gone. So are the photographs of the waves crashing off the cliffs of northern California, the giant Sequoias, Ben and Ricky Sue who picked us up on the two days we hitchhiked around Vancouver Island and showered us with hospitality in the form of beer and a guided tour, icy blue Kootenay Lake in British Columbia, and many, many campgrounds in the US and Canada. The copy of “Stranger” is gone along with the books that followed, “The Moon is a Harsh Mistress,” and “Time Enough for Love.” Along the routes we took, we lost our fear of driving in cities and some of our shyness. We discovered that the world may be smaller than if feels sometimes when we found a car in Lake Louise bearing license plates from our Coos County in New Hampshire. We learned that fender-benders don’t define the success or failure of a journey and neither does running out of money in places like Port Angeles or, later, Medicine Hat, Alberta.

When I think of this trip from a distance of thirty-nine years, I can see more clearly that when we left on our trip, my brother and I were strangers to ourselves and strangers to adulthood. We wanted to grow up, see life outside the White Mountains which had both shielded and imprisoned us. We were teenagers seesawing between seizing life and wanting life to leave us alone. When we came home, we had a lot of road left to travel but more confidence to do it.

Since then, though, we have never had that much time together and we have never read aloud to one another. If I could get one moment of that trip back, I think I would ask for a stretch of highway somewhere out of the rain. I would be driving to the sound of my brother’s still-breaking teenage voice telling me the story of Michael Valentine Smith and taking comfort in being strangers together.

Congratulations to http://fatbottomgirlsaidwhat.wordpress.com! FBGSW commented on this post and that put her in a drawing for a copy of “Stranger in a Strange Land.” With this post, I continue a month-long celebration of journeys and books. Each post will focus on a particular journey and the book that either took me or came along for the ride. Because this month also encompasses my birthday, always a milestone in life’s journey, I want to celebrate by sharing the books I mention here. Each post will come with an invitation to leave your own thoughts and, by doing so, enter a drawing to win a copy of the book or books in that post. It’s a way of saying thank you for the wonderful welcome during my first six months of blogging here. I’ve learned so much and look forward to learning more.  My next post focuses on an internal journey with Katrina Kenison as my guide in “Magical Journey.”