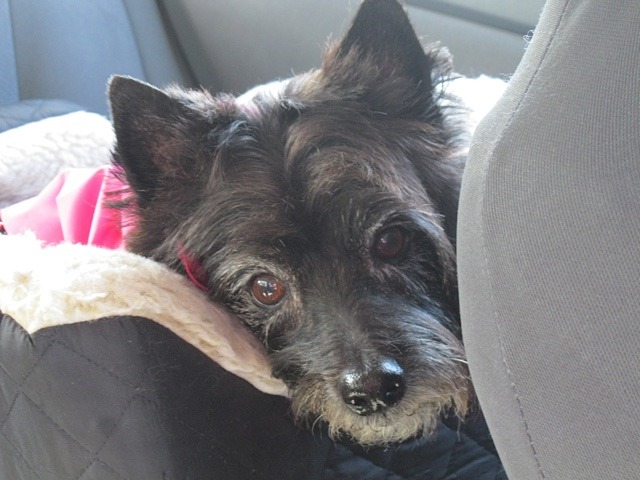 I took Chloe for a walk not long ago and ran smack into a lesson on boundaries, dog poop, and the love of God.

We had only gone a few steps when my ears picked up the voices of two women who regularly walk by, usually in the late afternoon. They stride down the middle of our street as though it is the yellow brick road and they and their two small dogs are twin versions of Dorothy and Toto. Their laughter precedes them and lingers in the air after they sweep past.

They weren’t laughing on this day though. One of the women peeled off from her companion, words spewing furiously. I caught the words, “he,” “job,” “asshole”  and watched, stunned, as she marched up our driveway to the garbage can against our house’s wall and threw a a loaded bag right into it.

“Hi,” I said, or something like that. Her companion looked at me and smiled so I went on in what I thought was my calm, reasonable, “adult” voice. “Normally, people ask first.”

By this time the poop-tosser was already back down on the road, charging past us. Her friend, made of softer material, hesitated. “I’m sorry, we didn’t know it was your house.”

The tosser, now well ahead, turned and yelled, “For the love of God, it’s a GARBAGE CAN!”

The friend shrugged apologetically and she and her dog scurried to catch up.

I seethed. Chloe tugged on the leash but I was immobilized by astonishment, resentment, embarassment, fury, righteous indignation, a sense of violation and, of all things, denial: Even as I seethed, I was telling myself that this was nothing. It didn’t matter now and wouldn’t even come close to mattering in 100 years when all of us would be dead.

I thought that denial was my maturity showing but really, it was just a ramrod I was using to stuff down all the discomfort that kept churning its way back up. The fact is, I felt trespassed against, ignored, run over by a sleeker, more powerful train.

Then Chloe tugged again and I began to move. The women were out of sight. For the first few steps, I wanted to chase them down to explain just exactly how wrong they were and how right I was. There’s a code, unwritten but nevertheless followed by most of us, involving reciprocity, proximity of garbage can to curb, whether or not the owner of the can is a dog owner and other provisions that my inner lawyer cited with force to my inner judge and jury while my ego clapped and the small sane person inside me rolled her eyes.

But as my small dog kept nosing her way forward, lost in the richness of my neighbor’s lawn – enjoying it fully even though it was not hers or mine – I became aware of my own breath. It was out of sync, pent up. It wanted to get out and just escape all that toxicity. Suddenly, so did I. I tried this thing I’ve been practicing for a long time now without consistent success: being mindful of my own breathing. I tried really hard to focus on each breath and let the anger do whatever it wanted to do. Turns out, when I wasn’t stoking my fury with one angry thought after another, it settled down. My chest relaxed and I almost laughed out loud at the thought of myself chasing her down. Perspective returned like grace. Something like forgiveness filled me but also gratitude – grudging perhaps but gratitude nevertheless – for the encounter.

The cans weren’t mine. Taxes pay for them and they are given to us by the city when we move in or are passed on by previous owners when we buy the house. We all pay for them. And those of us who believe in God would probably agree that she does not worry much about whose garbage can receives the poop. Those of us who don’t believe in God probably still believe in love with all its gentleness, strength, excitement, renewal, and demands. For still others of us, God and love are virtually the same and sharing is part of the deal we make no matter where our belief lies.

The poop tosser may have been rude but she was probably also suffering that day too judging by the heat of her diatribe and the need she had to spill out her frustration to her friend and to me. In the end, she was a fellow traveler who without realizing it asked me a tough question and then left me alone to wrestle with it: